When it comes to actually making changes to the way we live to lessen the impact we have on the climate, I can typically see both sides of the argument.  Take wind farms as an example.

As a child I used to look round at the views on Anglesey and strain and struggle to find any view that did not contain signs of human activity.  Even looking into the skies did not help as I realised that the slowly dissipating stringy clouds were produced by planes soaring across the heavens.

So I totally get why people would not want our beautiful landscapes further derided by human structures with the erection of turbines*.

What I don’t understand and really can’t abide is where people needlessly waste energy and pollute.

In particular: idling cars.  Bloody people sitting in their cars with the windows down in a car park with the bloody engine on.  What on earth are they thinking?  Really makes my blood boil.

I have at times resolved to ask people, or confront them.  I’ve tried a lot of different tactics.

I might open with “Excuse me, I hope you don’t mind me asking, what is the reason for you having your engine on at the moment?”

“What’s it to you?” would come the rather indignant reply.

“I’m worried about the fumes and the effect on the climate, not to mention that it’s wasting your money”

“Good point, thank you” was a recent response from someone sitting in a sports centre car park in their car.  They left the engine running.  I left them to it.

Or I might say “Excuse me, could you please turn your engine off?  My children are walking past your car and I’d rather they didn’t have to breathe in the fumes”.  More success with that one, but people can still get a little uppity.

Not many people realise that you only need to be stationary for 10 seconds or more before you would have saved money had you switched the engine off.  It is almost always worth switching off your motor if you stop at a traffic light (other than a pedestrian crossing – you don’t get much time to walk across the road), let alone when you are waiting outside someone’s home, or in a car park.

If you stop at a traffic light 10 times a day, and sit idle for 20 minutes a day on average, you would save between £180 and £632 per year on your petrol bill (depending on the efficiency of your car)**.  And your engine would last longer.  Imagine how much taxis could save.

I know at some times of the year people have the engine on to run the air conditioning or the heater.  Seems utterly daft to me – running a large petrol engine to heat a car?  Imagine doing that in your home, you’d feel a little daft.  But it’s when people leave the car running for no reason at all that really gets under my skin. 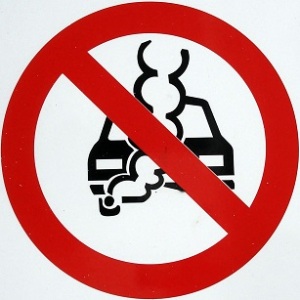 Oh, and by the way, it is illegal in the UK to have your car running while being on the mobile, even if it isn’t moving.  You need to switch it off and take the key out.

Thoughts on how (or whether) I should approach people much appreciated.

* The way I think of it, though, wind turbines are temporary.   If we want to cook, heat, watch telly, have loads of lights on in the house – we need electricity.  So we have a choice, do we generate that electricity in a way that will arguably spoil some views for 20-30 years?  Or do we instead burn gas, oil and coal, releasing carbon dioxide into the atmosphere to damage our climate – and hence our views – effectively forever?  Nuclear is another matter – I say let’s put a load of reactors round the coast as well as build the wind farms.  Bring on nuclear fusion.

6 thoughts on “Idling our future away”