Last Wednesday we held the first ever Ashlyns Lecture.  Here’s hoping they will become famous.  The speaker was Professor Ian Roberts, author of the acclaimed book Energy Glut.  And when talking with Ian I discovered one of those incredible coincidences that seem almost unreal. 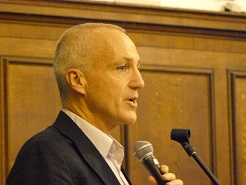 Transition Town Berkhamsted have been forming a partnership with the comprehensive secondary school in the town, Ashlyns: Hence the name of the lecture series.  We are going to be holding three of these talks per year, one in each school term.

A few short weeks of hectic meetings over a bowl of crisps, putting posters and Facebook posts culminated with about 100 people making their way up the hill to the school to hear Ian Roberts talk about his book and research.  He co-wrote the book with Phil Edwards, who happens to be a childhood friend of one of the members of my curry club, Nick.  I’d met Phil sitting round a fire at Nick’s 40th, although neither of us was in a fit state of mind for a sensible conversation.

But that’s not the coincidence.  Before the lecture started, I had a chat with Ian about his slides, which were resting on my laptop.  One of the slides showed a rather harrowing picture of a child war victim, which we agreed to drop.

“Yes, I was brought up there.  How did you know?” I replied.

“Bruce mentioned it over dinner,” said Ian – he’d eaten earlier with the main man behind the Ashlyns Lectures.  “Where did you live?”

Ian stared back at me with a look of surprise.

“That’s where I grew up!” he revealed.

Turns out we went to the same primary school and both went to David Hughes secondary school in Menai Bridge, if at different times.  Talking of Beaumaris Primary, I asked whether he remembered any of the teachers.  How about Mrs Thomas?

“Yes!” he said, with a characteristic drawn out pronunciation.  “The one with the big hug!” he mimicked a very recognisable bear hug that was unmistakeably Mrs Thomas.

We didn’t have time to reminisce further, as I was rushing about getting water and welcoming the audience, and he needed to refresh himself of his slides.

The talk started with Ian describing the subject of his very accessible book, which shows how our full roads lead us to increasing levels of fatness and are curtailing the freedom of our kids.  He described his motivation for writing the book.  It stemmed from the guilt he felt when once he promised a young girl that she would be OK after a horrific car crash.  He then put her under for an operation that she didn’t survive.  He is a medical professor, you see.

It seems obvious now.  As we drive more, we move less, which is making us fat.  We drive more still, because the roads are too dangerous to walk or cycle, and we’re able to carry more food home, so we eat more as well.  Our children cannot roam freely and are being brought up in a world where you stay still more than you run about.  We’re talking world society as a whole here, not just the UK – in general we are all moving less, driving more and getting larger.  And of course, all those extra car journeys are contributing to climate change.

Ian and Phil have written papers on the financial, individual and societal benefits that would result from more people walking and cycling.  A relatively modest shift would lead to thousands of fewer deaths from cancer and heart disease, which would be a great saving for the NHS.

One interesting factoid was that for someone over 40, the extra years of life from the fitness gains of cycling far outweigh the risks of injury.

I’m getting a bike for my birthday.  Today.

Following up via email the following day, I thanked Ian for his excellent talk.  It turns out that not only did we grow up in the same village, but our parents are still in the same village and know each other well.  My mother and his father are both on the board looking after the Canolfan in Beaumaris as the townspeople take it over from the council.