Thank you to all of you who participated in the survey a few weeks ago.  I’ll be revealing the results over the next few weeks, looking at each individual question and how the results correlate.

The main lesson I have learnt is that you lot quite like to interact, but not always publicly.  I got a much higher response to the survey than I was expecting.  It means that the survey results are a pretty good representation of the people who read this blog.

The first question was whether you believe that climate change is man-made.  I would expect that most people reading this blog are of that mind, and the results of the survey bore that out, although you are less certain than the scientists.  85% of you put the chance that changes since 1950 are predominantly man-made at 60% or greater.  The IPCC put the chance that warming since 1950 is man-made at 95%; and 97% of scientific papers on the climate endorse the same hypothesis. 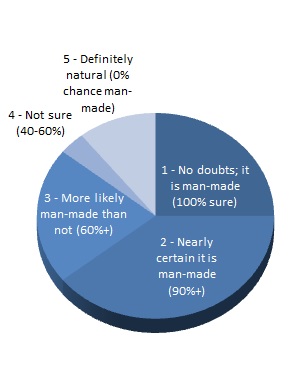 An interesting point to note is that no-one who responded thinks that global warming is probably not human-caused.  Those that think it is purely natural are 100% certain.  That would indicate to me that the thinking is a little emotional rather than rational, as we don’t have perfect information.  Unless there is some proof out there that I’ve completely missed?

1 thought on “Results are in – I know what you think”