It took three hours to get through to London via circuitous route on Saturday, with the trains up the swanny. It was worth every minute to get to Power Shift UK, which after all these months of planning, copious use of skype and the waxing and waning of the team, has now happened.  I feel very privileged to have been part of organising such a historical event.

After buzzing backwards and forwards to London to deliver painting materials for the conference banner and then working late into the night on Friday to make sure we knew the plan for the two days and had some idea of how our introduction would hang together, Saturday morning was about getting the posters, programmes, tea urns and accoutrements to UCL before the delegates started to arrive.

The introduction was due to start at 11am, and I have to admit that as the time drew near and I felt as though the attendance was going to be well down on the 150 people who had booked their places, as I was seeing the same few faces wondering around the building trying to find their bearings that.  I need not have worried, as 130 people of all ages and backgrounds rolled into Lecture Theatre 1 in the Cruciform building to kick off the event.  The other 20 would make an appearance at different times over the weekend.

We had a few inspiring videos lined up to get everyone in the mood for sharing stories and skills and hatching plans to shift the power from those who seem hell bent on destroying our natural world.  We pressed play, and watched some interesting looking pictures of flooding and wild fires, but not a decibel of sound accompanied them.  Veiled panic ensued – all rather annoying given it had all been working beautifully just an hour previously.  Eventually Tom found that someone had sat on the mute button on the remote and the audience were treated to this:

Our carefully planned intro had to be curtailed, which meant my idea was dropped, which would have involved me frantically pointing around while people shouted out a word to describe what they wanted from the weekend.  I’ll have to keep that one up my sleeve for another day.  It’ll be great.

The plenary speakers performed verbal miracles on stage, eruditely communicating on complicated topics, bringing interest and emotion, all without notes.  I have to say that for me personally, it was Fiona Brookes who stole the show, with a speech from the heart about being challenged to accept the innate differences and similarities between each of us. 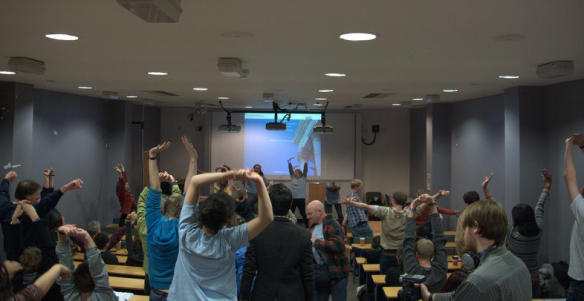 Only when we are together can we bring about the change in society that is needed for social and environmental equality and justice.  Over the weekend we found out how many different takes there are on how to go about that, and we also recognised how we need to incorporate all of those viewpoints into our thinking.  Once we recognise that we are all part of the same movement, we can move to critical mass.  As George Barda said in one of the opening plenaries, historically it has only taken between 1-7% of the population to be actively following a cause for it to become mainstream.

If the social and environmental movement in the UK can join together effectively, we would have that 4 million activists necessary to change our world for the better.

I was part of Power Shift UK 2014.  Will it be seen by history as one of the steps on that road?  Next – Power Shift UK 2, if the students from Warwick Uni keep their enthusiasm, plus potentially Power Shift Scotland.