I have to admit that I am struggling to keep all of my plates spinning.  The business is being much more successful than I could have hoped, which means that to keep the Transition Town, UK Power Shift, allotment and family nourished of my time requires me working early and late, burning the candle at both ends. 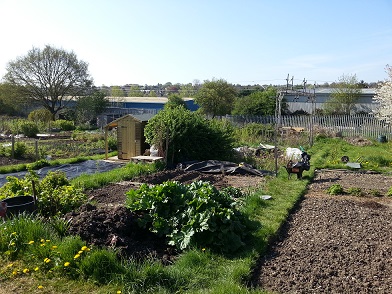 My allotment. The shed is in the neighbouring plot.

It is a crucial time of the year for the allotment, with all manner of life enjoying a little more warmth and trying to sprout up.  It is my job to try to make sure that the life that makes the best fist of it is edible.  Last year was my first year with an allotment, and I did a great line in slugs.  This year the plot is surrounded by a wall of garlic, with slug pubs and organic pellets ready to keep out those that make it through.  Slug pubs are glass jars buried in the ground, with a little roof overhead, with a little beer in the bottom – the terrestrial gastropod molluscs can’t resist a tipple.

The weekend just gone saw an all-day open meeting at the local Hospice to discuss community building in Berkhamsted.  The focus was on an interim and then long-term solution for a community centre in the town, which it lacks at the moment.  The centre of the town is also being developed in the upcoming years, with the location of the old Police Station, Library and Civic Centre up for grabs.  We want to organise what is known as a “charrette” (intense design meeting) involving as many of the townspeople as we can muster to make sure that the space meets our needs and not just want the council think it needs.

The other major initiative discussed on the day is called “My Compassionate Street”.  There is recognition that in 20 years’ time there will be as many people who are great grandparents as there are that are children, parents and grandparents combined.  I’ll try to grab the source and graphics on this for a future post.  So who is going to care for them?  My Compassionate Street will help us form those close neighbourly communities where we can help each other rather than rely on assistance from outside.  This will also enable collaborative consumption – where a street might buy a ladder and a power drill, rather than each household forking out and storing said items themselves.

I’ll stop there – I need to get on with some business work.

When we all pull in the same direction, change can happen.  We’ve seen that over the past few years with the changes of regime in the North of Africa, and throughout history.

In the UK, though, and I speculate in other western cultures as well, we are too disconnected for change to have a chance.  Yes, we are increasingly widely connected via the web, but there is a lack of human contact within our local communities.

For an example, take Berkhamsted, where I live.  The town is of medium size, with good access to London and to the north.  A large proportion of the residents commute to London.  They spend the day at work, come home on the train.  They then spend the evening in their homes, watching the telly.  Sometimes they will go out in the evening and they may know a few people in the town via a couple of clubs and the kids.

Therefore there isn’t a great sense of being part of a community, as our lives are largely insulated from those around us.  We are more likely to compare ourselves with the neighbour than we are to lend them a lawnmower; more likely to complain about the litter than get together to pick it up.

Our personal health and well-being and the quality of our lives are improved if we spend more time with each other.  You may recognise the feeling of not having enough energy in the evening to do anything much.  You may also recognise the fact that even when you feel tired if you go out and meet people then you have a great time and feel energised.

Arguably the greatest benefit of the Transition movement therefore is to re-build and cultivate that sense of community.  The aim of the Transition movement is to help move us to the low-carbon future, addressing issues such as resilience to the effects of climate change, peak oil and financial austerity.  This is a big ask and not one that can be achieved without a community in place that is capable of acting as one.

I have been involved in Transition Town Berkhamsted (TTB) for a number of years, and was elected co-leader in May 2012.  It is a very rewarding movement to be part of, plus of course a great challenge, as so few are motivated to address the issues.

The Transition Network or Transition movement encompasses about 1000 different communities around the world.  The communities, dubbed Transition Towns, might be a neighbourhood or might be up to a whole town or district.  About half are in the UK, where the movement started, the rest are spread over the globe, in particular in the states.

This might be a good focus for my time.