I think that we should treat each other as we would treat our own family and how we would expect to be treated in return.  That means everyone, wherever they happen to live or were born, around the world or in what year, past, present or future.  Someone who was born in 1920 in the US or in 2045 in Bangladesh are equal to you, to me and to each other, and should be treated as such.

Your rights are important.  Should you consider the impact on anyone else who could be affected each time you do anything?  How can you possibly know what those impacts are?  You’ve got to be able to get on with your life.

Some would say that the law is there to guide you – as long as you act within the law, you are acting fairly and morally.  Maybe you could add to that the monetary and tax system – as long as you are making a balanced judgement as to whether your benefit is worth the cost of an action, then you are acting fairly.  You wouldn’t shaft someone on a deal, even if it was within the law, if it meant your relationship or reputation would be damaged.

So, with that as context, back to climate change.  I talked about changing the law in the last post.  If that is too restrictive, then how about changing the tax system instead?  How about a tax on the emissions at the point that greenhouse gases are emitted, in proportion to the future monetary and environmental cost?  A tax where the revenue from the tax is given out to everyone equally, as a universal allowance?  The cost of the tax would be added to transport fuel and to the cost of generating electricity.  It would be added at source if emissions are required to get at the fossil fuels in the first place, such as with tar sands in Canada.  The cost of the tax might then be passed down to consumers, who would then either gain overall (if they were careful in the impact of their lifestyle and purchases) or would lose out if they were more reckless. 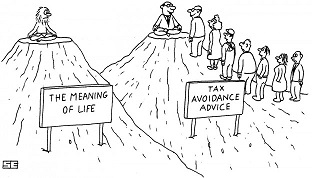 Sounds fair enough, do you think?  Difficulty would be that it would need to be adopted globally to work, otherwise you would just import your electricity or buy products from aboard where the tax was not in place.  To get around that in any particular country, such as the UK, you could add it as an import tax as well as a tax within the country borders.

Hmm, maybe.  Hang on, though, John – are you just suggesting this because you want the tax break?

Actually, no.  Whereas I think such a system would be a huge leap forward and if adopted widely would potentially get us out of the hole, I can’t see it coming in soon enough, if at all.

What should we do in the meantime?  Should we be able to do what we want within the law and within the current tax system?  If only a few nutters like me have stopped flying, it’s not worth making the sacrifice until the law or tax system changes.

Do you think?  Do you really think so?  Is it fair and moral, without a change in the law or tax system, for you to prioritise your own luxury and comfort over the basic needs of my children and grandchildren, and of people living in Bangladesh now and in the future?  What about our heritage, of the glorious abundance of beautiful flora and fauna, sadly diminishing fast?

3 thoughts on “Tax, Morals & The Solution”