Everyone is. You are. I think this is really important.

I am in denial about the inevitability of climate change disaster. The good news is that realising I am in denial might just allow me to come to terms with the apocalypse and find my way through.

It seems that the natural human way to deal with any change, not just a bereavement, is roughly the same. Firstly, there is brief shock, then denial. Ignore the facts, and we cope. As we accept the facts, we move through anger, bargaining and inevitably depression. Only when after dealing with those emotions can we move on to acceptance and positively learning our way beyond. We can stay in any of those phases for long periods, and can yo-yo between them.

I went through these stages with climate change, just as I am going through them again with our ability to avoid its worst effects. With climate change, for years I was aware of the problem, but avoided thinking about it. Then I remember watching the climate change denial documentary “The Great Climate Change Swindle” and grasping on to every word with hope. It was of course gibberish, but I wanted to believe. I’ve written about the anger I have felt. My experience now makes sense, with an understanding of the stages of accepting change.

I am ever hopeful that we will avoid catastrophic climate change, but I now accept the need to prepare for the worst. We have put a defibrillator to the beating heart of the planet, and are fiddling around trying to reduce the current rather than taking the paddles off. Emissions are increasing, targets are being watered down, and there is no sign of us making the connection between the destruction of the planetary life systems and our own wanton consumption.

When it comes down to it, I’m denying to myself is that there is a half-decent future out there for us, even if we are laggardly in lowering our carbon dioxide emissions. I am reluctant for some reason to think through what that future would mean. I have a painful vision of defending my family homestead from hungry marauders, like a scene from 28 Days Later. Maybe a better version would be the world working together to survive, long enough for us to stabilise the climate once more over a few hundred years? We’d unlikely be able to do it more quickly than that – there are 7 billion of us spending every waking moment burning as much fossil fuel as we can, what hope of doing the same in reverse? 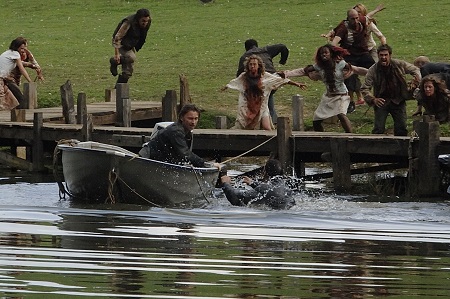 So, what next? I’ll have to get depressed for a bit, I suppose. Then I can get on with designing my future in a Cretaceous world.

PS – does that mean that in the meantime I can happily stop worrying about reducing my own carbon emissions? Can I fly again? Oh, no. That would be immoral. Climate change kills, and will kill. Contributing to it makes me as guilty of manslaughter as a parent smoking in the family home or car.